Sorry about the late post! WordPress issues again, I’m afraid. Or I guess dinosaur computer issues, would be a more accurate way of putting it. Anyway, I took these photos of Shea’s new kitten on Monday and thought I’d share them. All of these were shot in manual — I’ve been trying to use it more often. It was a challenge, because she’s not your average kitten… she’s a little insane… so most of my pictures are blurry. Shou ga nai (can’t be helped)
Her name is Akira (kind of like Ah-ki-la*), isn’t she pretty? 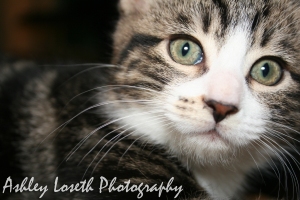 Akira is a Japanese unisex name meaning “bright” or “clear”. I think it’s more popular for boys, but it really suits her. Shea had a list of names, but it kept coming back to Akira.

search art and then some

I'm just a 20-something, Canada born, Scandinavian mix with a wide variety of interests. To learn more about me and my blog, check out my about page. ^-^

my shop on redbubble.com